Menstrual migraine is more severe, longer duration, and less responsive to traditional pharmacological treatments, yet amazingly, neurologists debate whether it actually exists! It first appeared in the appendix of the International Classification of Headache Disorders (second edition) and remains there in subsequent revisions. The appendix is for:

The debate centres on whether menstrual migraine is a seperate migraine type or whether hormonal changes are just a trigger. The somewhat semantic debate detracts from the more important discussion about what is causing it and how best to treat it.

What do hormone fluctuations have in common with changes in the weather, stress, over or under sleeping and skipping meals – all common migraine triggers?

Clearly, whatever the underlying physiological cause of menstrual migraine is, it relates to more than just regular and normal fluctuations of sex hormones.

The answer lies in what is similar across different migraine (and headache types) rather than what is different. 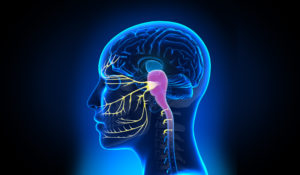 The key characteristic is that an area in the brainstem, that is the ‘headache highway’ – the Trigemino-Cervical Complex (TCC – brainstem region where trigeminal (head and face) nerves mix with upper 3 neck nerves) is overstimulated in between attacks. Like a powder keg it awaits a spark (or trigger) to push the system over the edge.

In menstrual migraine a possible combination of increased stress on the system from inflammatory prostaglandins, and a reduced capacity to control pain (from falling oestrogen’s effect on pain transmission and suppression systems) serves as a trigger to ‘blow up’ the sensitive brainstem.

The question is what is causing this overactivity?

As with all things migraine there are often a number of different answers for each person, with sleep, diet, relationship to stress, hydration and exercise all significant factors. However, the nerves from the top of the neck feed directly into the TCC, and with neck and spinal pain one of the most common ailments, it is hardly surprising that the top of the neck is the most common cause of this overactivity. Assessing and treating this sensitivity using techniques specifically designed to do so is the Raison d’être (reason for being) of the Melbourne Headache Centre.

Find out how we treat

here at the Melbourne Headache Centre

The classification can be broadly divided into two forms:

A. Attacks, in a menstruating woman, fulfilling criteria for Migraine and criterion B.

B. Occurring exclusively on days -2 to +3 of menstruation in at least two of three menstrual cycles and at no other times of the cycle.

A. Attacks, in a menstruating woman, fulfilling criteria for Migraine and criterion B.

B. Occurring exclusively on days -2 to +3 of menstruation in at least two of three menstrual cycles and additionally at other times of the cycle.1

These are then subdivided further by their migraine phenotype – migraine with or without aura.

of female migraineurs triggered by menses
Women account for

of lost labour costs from migraine
Headache recurrence is

Up until puberty males and females suffer migraine at roughly the same rate, however the impact of changes in oestrogen levels sees the rate increase over the next decade such that:

The triptans all show equivalent efficacy, but as menstrual migraine attacks tend to last longer, Frovatriptan has a longer elimination half life (26 hours) been shown to be effective for longer. It is currently unavailable in Australia so Naratriptan (Naramig) has the next ‘longest’ half life at 6 hours (compared to sumatriptan – 2hours).

CGRP receptor mAbs (Erenumab) is no less effective in menstrual migraine compared to other migraineurs, whilst telcagepant not only showed no clinically relevant reduction in headache days compared to placebo, but it was also removed from trials due to risk of liver toxicity.

Evidence is limited to observational studies of low quality. Continuous and extended regimes with shortened ‘hormone free’ intervals show mixed results with one study showing no change, and another showing 50% reduction in headache days.

As 30% of people we treat report no neck symptoms, and a further 30% only report tightness under the base of the skull, the neck is not often considered relevant. However, the nerves from the upper three segments of the neck (C1-C3) feed directly into the trigeminal nucleus, and are the only anatomical structure identified as being a potential cause of the overstimulation of the trigeminal nucleus.

The pioneering work of Australian physiotherapist Dean Watson has not only identified a previously ignored fault in the top of the neck responsible for overstimulating the brainstem, but discovered how to treat it leading to an approach that leads to the ability of the menstrual migraine sufferer to eventually self manage their own treatment.

Research has proven the techniques known as the Watson Headache® Approach decrease overstimulation of the brainstem, effectively normalising the central nervous system activity referred to above, so that the fluctuation of hormones is no longer able to act as a trigger.
​
This is the only ‘hands on’ approach to do this.

Whilst there is much speculation about what causes menstrual migraine, to date only three factors have been validated as independent mechanisms;

A decline in plasma oestrogen levels following several days exposure to high oestrogen levels (as occurs in the late luteal phase of the menstrual cycle) is associated with increased risk of migraine. Oestrogen modulates the activity of several neurotransmitter systems involved in the migraine pathophysiology including serotonin, CGRP, and opioid receptors. The absence of progesterone is thought (but not yet proven) to be of importance as it boosts GABA, providing increased pain modulation and decreased pain perception.

The impact on modulation of serotonin and CGRP are not enough to explain the cause of migraine and it’s vitally important to note that:

“Patients with menstrual migraine do not generally have hormonal abnormalities.”

Dr Loder is referring to the fact that research demonstrates hormone profiles of migraineurs and non-migraineurs do not differ, and that if changes in hormones and prostaglandin release alone caused migraines, every woman who has a menstrual cycle would get one. Yet only 4-8% of women get a menstrual migraine.

Dysmenorrhoea, in which prostaglandin release causes pain increases the risk of menstrual migraine, and migraineurs who are injected with prostaglandins will suffer migraine-like attacks.

Given that prostaglandins are released from the endometrium into systemic circulation during the first 2 days of menstruation, the hypothesis is that they may play a role in migraine pathogenesis, however, very little is known regarding the role of prostaglandins in menstrual migraine.

In menstrual migraine, as with non-menstrual migraine, the part of the brainstem that causes headache is in a constant state of irritation. Recent research has shown this area, called the Trigemino-Cervical Complex (TCC – brainstem region where trigeminal (head and face) nerves mix with upper 3 neck nerves) changes activity in the days before a migraine, followed by the hypothalamus (implicated in hormone secretion) and dorsal pons (pain modulator).

As the hormone release is no different, it brings the TCC, and by extension, the upper cervical spine (neck) into the frame as a key instigator in an attack.

While clearly hormone changes trigger episodes, the hypersensitivity of the trigeminal nerves is where the impact of losing pain modulation occurs.

An easy way to think of the interaction is that activity in the brainstem is like water in a cup.

Non-migraineurs have a near empty cup. 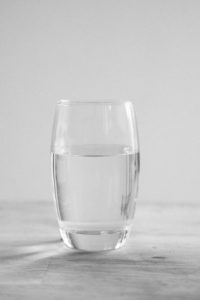 Menstrual migraine sufferers (along with all other chronic and recurrent headache sufferers) have a cup that is near full all the time. Typically a ‘trigger’ will then overfill the cup. These triggers can enter the trigeminal system in a number of ways via the lining of the mouth, nasal passage, small changes in blood vessels.

Oestrogen helps the body produce and absorb serotonin. Serotonin is what sets the height of the cup – its the barrier that this activity has to breach in order to give you a headache or migraine.
So with your cup that is already near full, the rim shrinks down to a half cup, and now you are overflowing the cup and have a migraine.

The question is why is the TCC so sensitive that changes associated with menstruation (falling oestrogen and prostaglandin release) that normally don’t cause headache, result in migraine?

Reflex testing and PET scans have previously indicated that the TCC is overactive before the headache starts. It is ‘overstimulated’ and causing dysregulation of the brainstem.

The Watson Headache® Approach, used exclusively at The Melbourne Headache Centre has been proven2  to decrease the ‘noise’ or irritation of the TCC. The reflex activity normalises.

The differential diagnosis for pure menstrual migraine is essentially confined to working out which headache phenotype (migraine, tension-type headache, cluster headache) the same as for Migraine as very few conditions mimic migraine AND are so heavily tied to the menstrual cycle.

A condition that consists of painful menstrual cramps. It is considered ‘primary’ if no discernible organic basis can be found, and secondary if due to gynaecological causes, the most common of which is endometriosis.

Episodes are often accompanied by nausea, headache and irritability, and it is likely that a shared pathogenesis is involved.

Given the link between oestrogen and serotonin levels many women wonder if they have low oestrogen as a cause of their migraines.  It’s important to remember that it is the sudden drop in oestrogen rather than the level that impacts migraine. Low oestrogen typically presents with an array of other symptoms that indicate something is not right hormonally, including:

PMDD may be characterised by:

These symptoms overlap with a range of other common conditions such as thyroid disorders and menopause, and you should seek qualified medical assessment to determine the cause of any of the above symptoms.

Learn more about our unique treatment, and what to expect during out consutations