flashes like lightning seemed to dart from his eye, and generally his right eye. Not long after, a violent pain seized his right temple, and then his whole head and neck. The back part of his head at the vertebrae swelled; and the tendons were upon the stretch and hard

Oldest description of migraine and aura – Hippocrates 400BC

Migraine aura is one of the most universally thought of symptoms of migraine by the general public, despite affecting less than 30% of migraine sufferers.

So synonymous is aura with migraine, that many people presenting for assessment believe they don’t have migraines ‘because my eyes don’t go funny.’

What is a migraine aura?

Aura is defined as a unilateral, fully reversible positive or negative neurological symptom. A vast majority (up to 98%) will experience visual disturbances from scotomas or loss of vision and visual snow. This is due to the occipital lobe (containing the visual cortex) being the first affected by the changes occurring in the brain during aura.

Classic examples are scintillating scotomas experienced by 50% of people having aura’s – these are the patches of lost or blurred vision that are replaced by geometric shapes (zig-zag lines, crescents, fortification tower shapes, etc).

What causes a migraine aura? 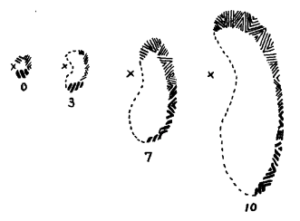 In 1941 psychologist Karl Lashley recorded the progression of his scotoma. With the ‘x’ marking a central focal point and the numbers representing minutes from the onset of the aura. He concluded that this wave of inhibited activity moved across his visual cortex at approximately 3mm per minute.

Just 2 years later in a different Harvard laboratory, biologist Aristides Leão was experimenting with electrically shocking the brains of rabbit brains, and noted a wave of spreading depression of 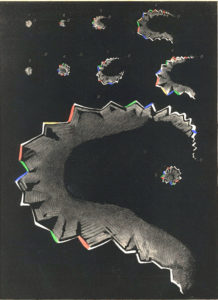 neuronal activity that spread across the surface of the brain. Later researchers examined the rate of spread of Leão’s wave of ‘cortical spreading depression’ (CSD) and reckoned it to be 3mm per minute.

The location and speed of the wave approximate the quite spectacular images captured here by Hubert Airy in 1870, and repeated several times after.

The diagram depicts the progression of his fortification spectra.

Despite the presence of an aura, the underlying characteristics of this version of migraine are the same. Migraine can be viewed as the symptomatic expression of an overstimulated stress response system in the brainstem. The master of which is the Locus Coeruleus (LC). In keeping with the notion of CSD as one manifestation of the stress response, loss of  LC signalling lower the threshold for CSD – i.e. makes aura more likely.

What then, is the ongoing internal source of overload making the system so susceptible to other sources of physiological stress (lack of food, lack of or poor quality sleep, physical stress (over exertion/exercise), certain hormonal events, and injury) to trigger attacks?

The ability of the Watson Headache ® Approach to decrease underlying ‘noise’ in the trigemino-cervical complex has been validated. It is likely the reason why this then provides successful treatment of aura is due to the LC resuming ‘normal function’ rather than remain irritated.

Treat the underlying irritation before attacks begin and deal with a vital piece in the migraine puzzle.

Find out how we treat

here at the Melbourne Headache Centre

The International classification of headache disorders version 3 (ICHD-3)1  describes migraine with aura as:
Recurrent attacks, lasting minutes, of unilateral fully-reversible visual, sensory or other central nervous system symptoms that usually develop gradually and are usually followed by a headache and associated migraine symptoms.
A. At least 2 attacks fulfilling criteria B and C
B. One or more of the following fully reversible aura symptoms:

C. At least three of the following six characteristics:

D. Not better accounted for by another ICHD-3 diagnosis

of sufferers working
An aura always occurs in

Researchers have attempted to study what type of aura people suffer, and it’s plain to see why visual aura is the most commonly thought of, but this also demonstrates how varied aura can be.4

The same study discovered how variable aura can be with people often suffering multiple aura symptoms:

As you can see migraine aura extends to cover a wide range of presentations, with rarer examples being parosmia, dysphagia, dysgeusia, hypokinesia, paramnesia, auditory hallucinations and altered cognitive function.

None of the drug trials for preventive medications have compared the effects on migraine with aura versus migraine without aura.6

The Watson Headache® Approach, used exclusively at The Melbourne Headache Centre has been proven to decrease the ‘noise’ or irritation of the trigemino-cervical complex. This means rather than just ‘stretching or massaging’ the neck and hoping something might help, we are actually treating the one irritating factor that is constantly present, whether you have symptoms or not.
During the assessment we are looking for three key factors:

The Watson Headache® Approach deals with a small fault in the top of the spine which creates a spasm in OCI. Properly identifying and treating the cause for this muscle spasm is a critical step that is often missed, and has a profound effect on the response to treatment.

At the Melbourne Headache Centre, we have vast experience in providing treatment for migraine with aura. We are used to treating people with chronic issues and sensitive necks. We understand that many of our clients seeking treatment  may have been aggravated with the ‘press and guess’ approach some standard manual therapies employ.

Treatment using the Watson Headache® Approach is not about ‘deep and painful’ manual stretching techniques.
There is NO manipulation or cracking of the spine.
We are treating the sensitivity driving symptoms, rather than simply trying to ‘stretch the joints’.

By treating the source of the spasm we can do so with minimal aggravation and maximum impact, and it’s also the reason why we typically see rapid changes, and often don’t need to do a lot in terms of hands on treatment.
Many people have this fault in the top of the neck. If you are sensitive to the ‘noise’ it creates you will potentially have symptoms associated with migraine with aura.

This is a non-invasive procedure inducing a single transcranial magnetic pulse to attempt to disrupt the CSD. Results vary significantly from no difference between sham TMS and TMS, to 17% of people benefiting above sham TMS. Research continues into this modality.

Migraine and it’s aura was considered to be a vascular event from the work of Wills in the 18th century and enshrined by Wolf in the 1940’s. The theory proposed an initial wave of decreased blood flow causing prodromal symptoms including aura, followed by a reactive vasodilation resulting in the throbbing pain of headache.

In 19447  researchers observed an event they described as cortical spreading depression or CSD in which they observed reduced electrical activity as measured by Electroencephalogram (EEG) spreading across the cortex of rabbits after electrical stimulation. This wave began in the occipital lobe and spread forward at a rate of 3-6mm per minute, which matched the progression of the aura drawn by Lashley (see figure above) 3 years earlier 8 .

Some decades later, in 1981 Olesen and colleagues9  described blood flow changes occurring in sufferers of migraine with aura that mirrored the changes in neural activity observed by Leao, and a firm hypothesis was formed, with the primary event being neural, with blood flow changes as a consequence.

In 2007 researchers10  demonstrated that the wave of decreased blood flow does not occur at the same rate as the rate of decreased activity in the cortex – assumed until this point to be linked. Despite much time and money invested in working out the mechanics of migraine aura, at present similar events to  CSD have been observed, but the mechanism in the human brain appears much more complex than first thought.

Essentially, as the blood flow decreases the nerves are not able to conduct signals. As the signals stop the brain isn’t able to interpret the information, for example, from the occipital lobe (visual cortex) – so part of the visual field are lost, or in some cases replaced, and we have a scotoma. Depending on which parts of the brain are most susceptible in a particular individual, the area that ‘goes offline’ may vary, but overwhelmingly the visual cortex (occipital lobe) is involved in the majority of cases.

There is some evidence that a CSD like event is a reaction of the upper part of the brain to what is occurring in the brainstem, rather than the cause.

That CSD has been observed in people suffering a TIA (transient ischaemic attack) and subarachnoid haemorrhage, supports the possibility of CSD being a response of the brain to insult or injury, rather than a cause of migraine, and that the firing of the trigemino-cervical complex is another event triggering CSD in some people.
​
Sufferers of migraine with aura have the same abnormal brainstem function that other major forms of headache have (including migraine without aura, menstrual migraine and tension-type headache). The abnormality shared by all these disorders is an overstimulated brainstem in the area housing the trigeminal (face and head nerves) and upper three cervical nerves (top of the neck).

This is due to the occipital lobe (containing the visual cortex) being the first affected by the changes occurring in the brain during aura.11

A growing number of gene-based studies have attempted to provide answers on causation with migraine and migraine with aura. In particular the methylenetetrahydrofolate reductase(MTHFR) gene which is important in folate metabolism has been implicated, especially in the comorbidity of migraine with aura and stroke.12

Evidence from twin studies performed in Denmark indicate that the incidence of migraine with aura is higher in monozygote (identical) twins, with a recurrence risk of 50%, compared to 21% in dizygote 9non-identical) twins which is similar to the risk in non-twin siblings (27%). 13

Visual aura may occur with other conditions, but these are rarely confused with migraine.

As mentioned above, sub-arachnoid haemorrhage, transient ischaemic attacks, and epilepsy.

There are some key differences in migraine aura (MA) versus epileptic aura (EA):

The main differential diagnosis is with migraine with:

Learn more about our unique treatment, and what to expect during out consutations