Follow me on a little story that describes the standard approach to headache and migraine and why it often doesn’t work in the long run.

You are sitting in the living room watching the news and the weather forecast comes on. Rain.

That little feeling in the pit of your stomach kicks in. Just relax you say. Maybe it won’t happen this time. Later in the evening the sound of rain against the roof takes the feelings up another level – you’re anxious now, trying to convince yourself things will be o.k. but deep down, knowing they won’t be.

At first tings seem o.k. and you start to think, ‘phew, not this time’……..then ‘tap, tap, tap’ the drip starts through the ceiling.

You know you only have minutes to act before this starts pouring in and floods your floor, knowing this could wipe out your house for days while carpet and furnishings dry out. Having gone through this enough times, you’re prepared now………you grab for you bucket and catch the leak. Saved!!

What if you’re not awake when it starts next time? Over time one bucket isn’t enough, and the storms seem to be coming with greater frequency and intensity. Where will this end? Are you going to be fighting off these leaks daily? There must be a better way. 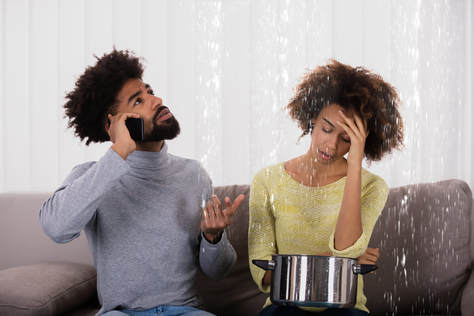 Time to try another approach. You call a local builder, who is known to specialise in leaking ceilings. He investigates the leak inside the house and says there’s nothing wrong with the ceiling – how can that be? What about the roof or gutters you say? He takes a brief look and says ‘they look fine’.

He says while he doesn’t know what’s causing the leak he does have a solution to stop it. He needs to put a giant tarpaulin up over a large section of roof and anchor it into your walls. He says in some cases the anchors can cause a little bit of damage, but nothing compared to flood damage or a collapsing ceiling. Now you’re scared, and you’re fed up with the leaks so you go with it.

The tarpaulin is put up. The first thing you notice is it covers everything including skylights, turning a nice sun-drenched lounge into a dark cave, but that’s a small price to pay.

That night he rain starts again. You still get a tiny leak but it’s really not much compared to normal. The tarpaulin seems to be working, but you can feel a draft coming in that seems new. Checking the wall, the anchor for the tarpaulin has created a major crack in the brickwork that has caused some plaster to fall off the wall and is letting the air in. You call the builder back to look at the wall. He asks you how the leak was. When you say ‘great but the wall now lets the cold air through’, he gives you a look like ‘well we can’t have everything’.

Do you remove the tarpaulin and fix the wall? Which is worse the leak on the draft? At least you had ways of dealing with the leak……….

Headache and migraine is constantly dealt with by giving you a bucket (abortive or acute/rescue medications such as the triptans) or a tarpaulin (preventive medications) which often have side effects worse than the problem they are trying to resolve.

Even the new CGRP inhibitors (CGRP-mAbs) are akin to putting a giant sponge in your roof cavity – hoping to mop up the water before it leaks through.

In the whole 4 days of the recent American Headache Society Annual Scientific meeting there wasn’t any emphasis on underlying causes. The biggest frustration I have is that the ‘cause of migraine is unknown’ myth is still perpetuated.

Whilst we can’t walk you through a complete A-Z of every aspect of attacks we have a vast amount of knowledge pointing to key structures that are implicated in the cause, but also (not surprisingly) treatment.

We know that the major inputs into this area are the trigeminal nerve and the upper three cervical spine nerves.

We know that when we apply our technique to the upper cervical spine, the overactivity of the trigeminal nucleus normalizes13 .

You wouldn’t dream of putting up with a leaky ceiling without getting a specialised roofing plumber to at least check the roof and gutters right?

So why would you do that with your migraines?

Hopefully you are ‘catching the drips’ effectively and maybe even ‘put on a tarp’ to cover everything, but the fact is you still have a problem – it’s just being masked. The neck remains the most logical place to investigate, as it has direct anatomical access to the trigeminal nucleus – the area known to be ‘headache central’.

One assessment can rule your neck in or out as a source of irritation for your headaches, and have you on your way to living without the leaking ceiling. Call us today and speak to a consultant.